RARELY do people compare the British pound to the Nigerian naira, Azerbaijani manat or Malawian kwacha. But these are special times. Following the Brexit vote, investors dumped sterling. Some are worried about the possibility of a “hard” Brexit. Others are simply baffled by the government’s xenophobic and divisive rhetoric. 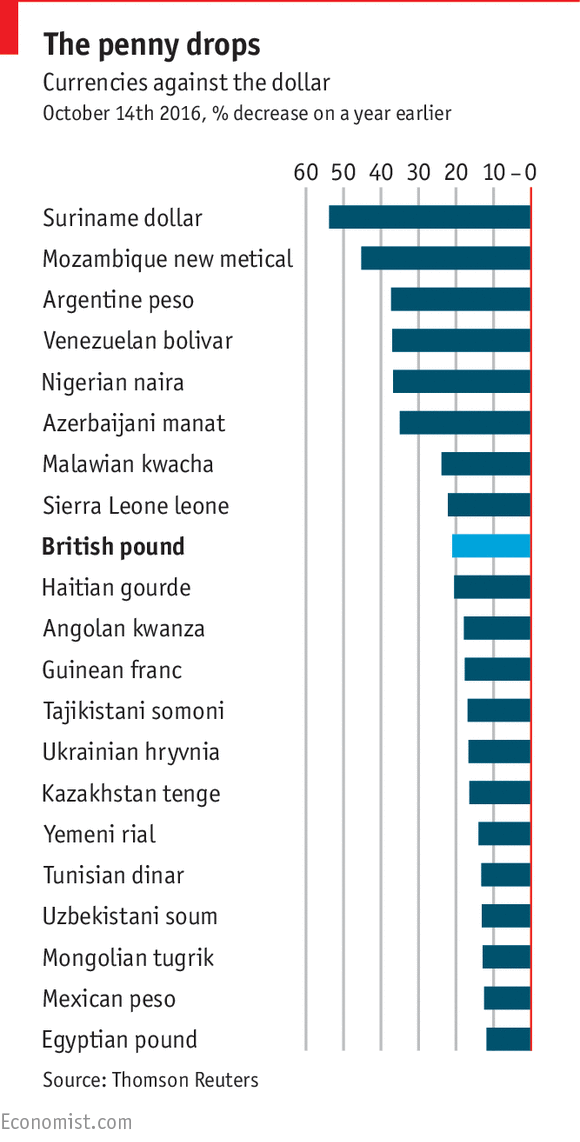 One question which people have not really explored is, what assets precisely are investors selling? After all, British stockmarkets are on the up (in pound terms, at least). And Britain’s government-bond prices are still very high (though in recent days they have fallen a little). Both of those phenomena suggest that money is flowing into British assets, not out of them.

We cannot be sure, but one likely explanation is that foreigners are selling cash holdings (instead of assets). The rise in the stockmarket, meanwhile, may be mainly due to the actions of domestic investors. The FTSE pays lots of dollar-denominated dividends so is increasingly attractive to British investors as the pound falls.

Anyway, so the pound is falling. How bad is the drop? To the right is a chart of a year-to-date change against the American dollar, focusing just on the worst-performing currencies. Right at the bottom is the Suriname dollar, which is in freefall amid falling commodity prices. You can also see currencies like the Nigerian naira, which is affected by falling oil prices and the vain attempt of the central bank to prop it up.

So sterling isn’t right at the bottom. But it’s doing pretty badly.